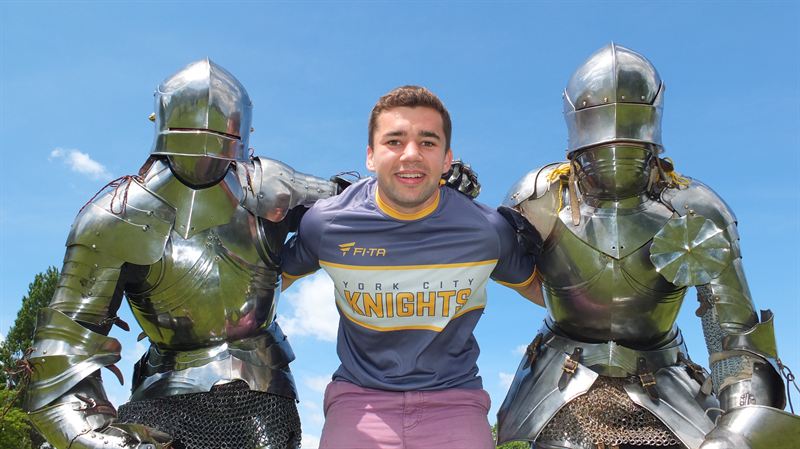 Yorkshire’s medieval knights are training with modern athletes to ensure they have peak levels of fitness for this year’s Yorkshire Medieval Festival, the longest and liveliest celebration of the Middle Ages in the UK. During the four-week festival, there are over 14 days dedicated to the world of the warrior, in a series of battle recreations, combat skills and expert talks and tours.

“Knights were the elite athletes of their day, and the tournament field was the most brutal test of endurance”, explains Danielle Daglan, festival director. “Knights had to be in peak physical condition. It’s really important that our knights are as authentic as possible, able to withstand the rigours of modern re-enactment campaigning, and that includes their fitness levels. Many of the medieval re-enactors are professional athletes – they just wear armour instead of lycra!”

“The medieval world was a military world,” adds Danielle. “During the Middle Ages, England was almost constantly at war – with France, Wales, Scotland, the Low Countries, and itself. Ambitious knights could also earn great renown and wealth by fighting in grand French tournaments like William Marshall, or by fighting as a mercenary like John Hawkwood; they could even earn heavenly reward on Crusade.”

Every aspect of medieval combat is explored during the annual Yorkshire Medieval Festival, now in its third year and organised by the JORVIK group, who also host the annual JORVIK Viking Festival. As well as traditional battle displays, event-goers can participate in medieval combat classes at the Hotspur School of Defence, discover the secrets behind Hollywood choreography, or the graphic reality of injuries caused by deadly medieval weapons.

The Yorkshire Medieval Festival 2014 kicks off in Rowntree Park, York on 2-3 August with Medieval Merriment , an extravaganza of knightly combat, living history, and merry medieval mayhem. The full 4-week festival brings together medieval-themed events, activities, talks and tours at various locations in York and the surrounding area, including Pontefract and Knaresborough, celebrating the 500-year period from the Norman invasion until the demise of Richard III and the start of the Tudor era.

With the interest in King Richard III this year, the horrors of conflict during the Wars of the Roses are also revealed in the newly-opened Richard III Experience at Monk Bar, and the Henry VII Experience at Micklegate Bar along the city’s historic walls, three landmarks that would have been familiar to Richard III when he visited York during his lifetime. Barley Hall, a medieval townhouse which was home to a wealthy merchant who welcomed both Richard III and Henry VII into York during the late 15 th Century, also makes a fascinating visit, and is the venue for many events during the Yorkshire Medieval Festival. Discounted entry to all three attractions, and also the JORVIK Viking Centre and DIG, can be gained through a special JORVIK Group Pastport available during the Festival.

A full listing is available on www.yorkshire-medieval-festival.com.